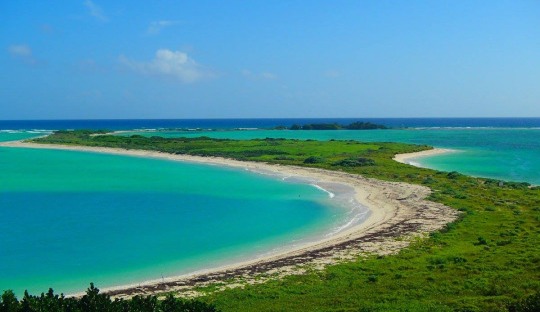 On New Years Eve 2015 Tim and I went to Dry Tortugas National Park which is two and a half hours by ferry west of Key West, Florida. We spent the day on this gorgeous island snorkeling, touring the old fort, and relaxing on the beach. About a half hour before we had to be back on the ferry, Tim and I went for a walk on a secluded, beautiful beach – nobody else was around, just the two of us. He asked me what my favorite part of 2015 was and my response was the polar bears in Svalbard. Tim agreed, but then said that his favorite part of 2015 was this moment right here. He turned me around and started to take off my grandmothers engagement ring that I’ve always worn on my right hand. He knew from before dating that this ring was special to me and the ring I would want to wear if I ever got married. He then got down on one knee and asked if I would marry him. I immediately teared up and excitedly said YES!!

The beach Tim proposed on

Tim and me right after the proposal!

This little guy was the only one around.

Did I mention there was a rainbow as we were leaving the island?

Travel writer with a thing for true crime podcasts, cats, and type A itinerary planning. View all posts by Sarah Puckett

This site uses Akismet to reduce spam. Learn how your comment data is processed.